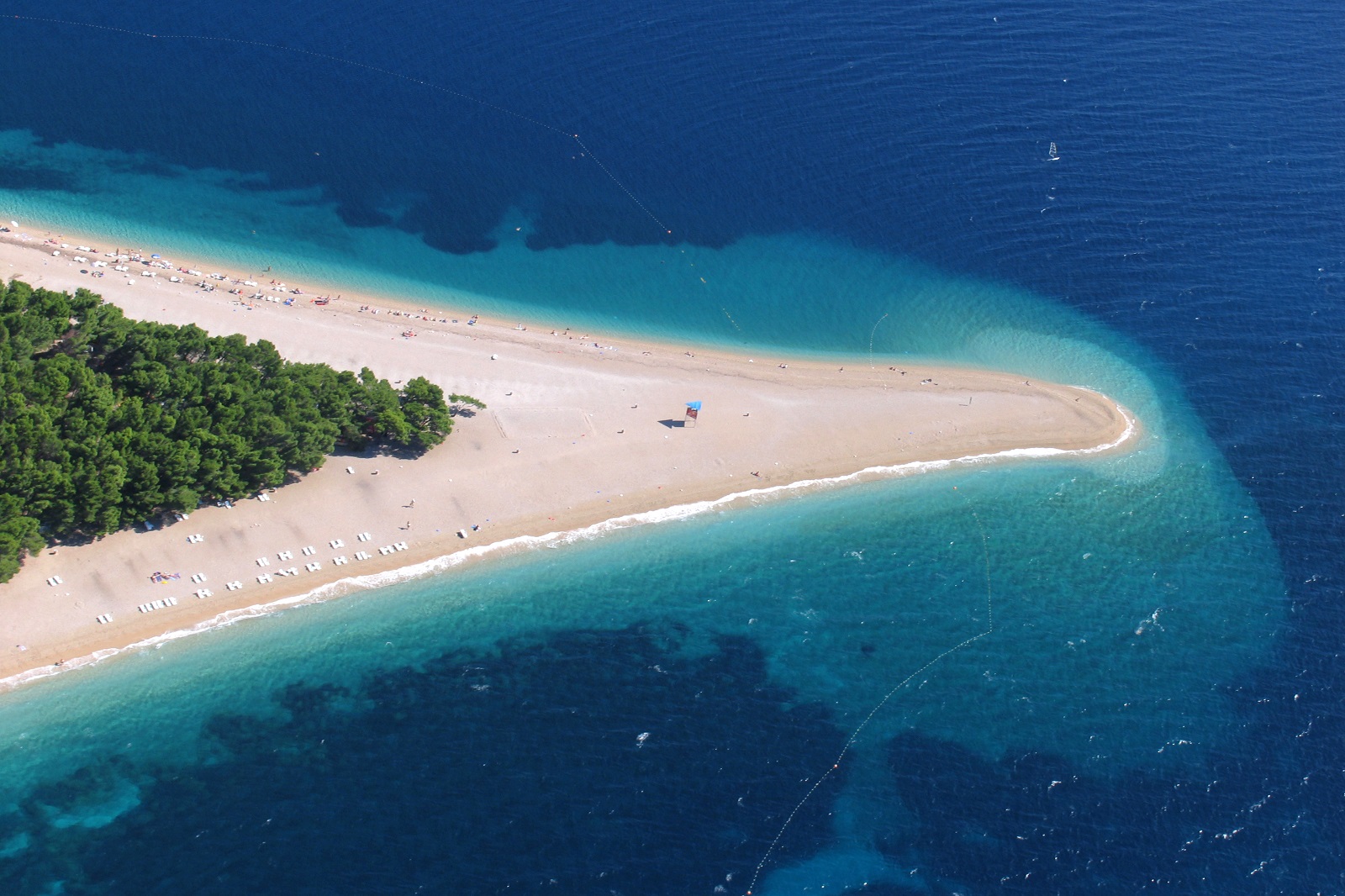 Near Bol, on the southern shore of Brač overlooking the Hvar island, you can find the Golden horn beach﻿, probably the most famous beach in Croatia.

Golden Horn is a pebble cape some 1000 meters long which changes its shape depending on the wind.

Brač is the third largest island in Croatia and the largest island in Dalmatia, encompassing an area of 395 km2 and boasting a population of approximately 14,500. The origin of its name is unsure although it is thought it originates from the Illyric word brentos meaning the deer. Brač is located in central Dalmatia, south of the city of Split and north of Hvar island. There are eight municipalities on the island and the largest settlements are Supetar, Bol, Pučišća, Postira, Selca, Sutivan, Milna, and Nerežišća. TP Line catamaran﻿ sails to Bol, a lovely settlement located on the southern shore of Brač, under the Vidova gora.

The western part of Brač around Milna is the most indented one therefore there are a lot of beautiful coves within a walking distance from the port. East of it, near Bol, on the southern shore of Brač overlooking the Hvar island, you can find the Golden horn beach﻿, probably the most famous beach in Croatia. It is a pebble cape some 1000 meters long which changes its shape depending on the wind. If you prefer sand beaches visit Lovrečina near Postira and Vela luka in Supetar. Brač is also famous for the Blaca hermitage﻿, established by two monks in 1551. It has been a part of the UNESCO World Heritage Tentative List since 2007. From antiquity, the Brač stone﻿ was highly valued. The highest quality marble was extracted throughout the island while nowadays that industry is located in Pučišća where the famous stonemasonry school is located. Brač stone was used in constructing the cathedrals in Trogir and Šibenik, the Parliament building in Budapest, the Reichstag in Berling, and the Diocletian Palace in Split.

In the time of the Roman Empire author Pliny the Elder called Brač the „capris laudata Brattia“, meaning "Brač famous for the goats." Byzantine emperor Constantine VII named Brač and Hvar the most beautiful and most fertile islands in Adriatic. In 18th-century Venetian travel writer, Alberto Fortis claimed that the wine from Brač is the best in Dalmatia. Discover the island praised in antiquity, the middle ages, and the early Modern period. Embark on the TP Line catamaran﻿ sailing to Brač every day from Split and Dubrovnik and enjoy the beautiful beaches, quality wine, olive oil, and the rich history of the island continuously inhabited since ancient times.

Find out more﻿ on the local Bol Tourist Board website and the Split and Dalmatia county﻿ tourist board website.

- Visit the Borak beach where you can engage in numerous activities.

- ﻿Don't miss out on the Senjković vinery﻿, one of the most popular on the island.

﻿   - Visit the Taverna Riva restaurant﻿ in Bol offering an interesting blend of traditional and modern food and a lovely terrace on the waterfront.

- Climb the Vidova Gora, the highest peak on the Croatian islands.

- Find accommodation in the Hotel Milna Osam﻿ reserved only for adults.

﻿   - Explore variety of accommodation in ﻿the luxurious Bluesun hotels﻿